At 7:00 p.m. Friday evening, presented by St. James’s Church In Celebration of the 20th Anniversary of the Installation of  C.B. Fisk, Opus 112 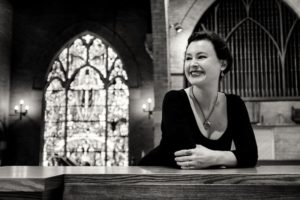 René Louis Becker (1882-1956) was the topic of her doctoral dissertation. She edits a continuing multi-volume critical edition of Becker’s organ music. Spritzer’s first two discs for Raven Recordings (Richmond, Virginia) are world-premier discs of Becker’s music in France. The first was recorded in Pithiviers, France, in 2010 at the newly renovated historic Cavaillé-Coll organ of the church of Saint-Salomon-Saint-Gregoire de Pithiviers. Choir & Organ magazine gave it five stars.

Dr. Spritzer has been heard on Michael Barone’s nationally-syndicated radio broadcasts Pipedreams and With Heart and Voice.