Summer is a great time to catch up on reading. If you’re looking for some ideas of what to read next, the St. James’s staff has a list of books you might consider. Happy reading, y’all! 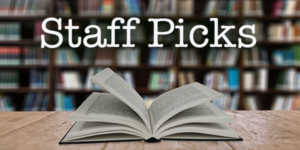 Cassandra Speaks: When Women Are The Storytellers, The Human Story Changes by Elizabeth Lesser – Ashlee Ligon

Wild Things: The Art of Nurturing Boys (A Practical and Encouraging Guide to Christian Parenting) by Stephen James and David Thomas – Ashlee Ligon

Blueberries for Sal by Robert McCloskey – Ashlee Ligon (for children)

Bach: Music in the Castle of Heaven by John Elliot Gardiner – Mark Whitmire

We Were the Lucky Ones by Georgia Hunter – Donna Ellis

Saving Jesus from the Church: How to Stop Worshiping Christ and Start Following Jesus by Robin R. Meyers – Jay Sandusky

The War of the Roses: The Fall of the Plantagenets and the Rise of the Tudors by Dan Jones – John McCard

Explorers of the Nile: The Triumph and Tragedy of Great Victorian Adventures by Tim Jeal – John McCard

The Devil’s Half Acre by Kristen Green – Katie Ricard

Walking on Water: Reflections on Faith and Art by Madeleine L’Engle – Virginia Whitmire

A Crazy, Holy Grace: The Healing Power of Pain and Memory by Frederich Buechner – Virginia Whitmire

Pastor: The Theology and Practice of Ordained Ministry by Will Willimon – Annika Cline

The Devil’s Half Acre: The Untold Story of How One Woman Liberated the South’s Most Notorious Slave Jail by Kristen Green – Amelia Arthur