The Vestry of St. James’s voted unanimously to call Father McCard on the recommendation of the Rector Search Committee, also unanimous, following its prayerful national search. He has been serving as Rector at St. Martin in the Fields Church, Atlanta, since 2004.

“The passion of our parishioners is one of the reasons we attracted such a gifted rector in John,” said Crowley in announcing the call.

“It’s a testament to our strength that we didn’t skip a beat over the past year.  Our programs remained strong, and we had a record number of donors pledging support,” she noted.

The Rector Search Committee was formed after Rector Reverend Randolph Marshall Hollerith of St. James’s was called to be Dean of the Washington National Cathedral last May. 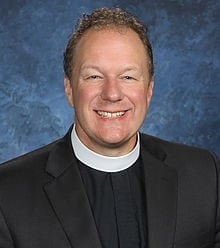 John serves as President and member of the Executive Committee of the Board of Trustees of St. Martin’s Episcopal School in Atlanta, which serves students from pre-K to 8th grade.

He is a vestry retreat leader and consultant as well as an authority on the writings and life of C.S. Lewis and The Chronicles of Narnia.

John is married to Cynthia King McCard, a classically-trained opera singer.  They have three daughters: Florrie (21), Clementine (17), and Matilda (14).

“The Holy Spirit led us to John,” said Charlie Whitaker, chair of the Rector Search Committee.

John expects to join the church staff in late August and then lead services beginning in the church’s new season, Sunday, September 10.