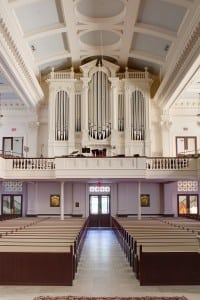 (click here to view our Centennial video with some history of St. James’s)

St. James’s was the third Episcopal church to be established in Richmond. In 1831 a group of Episcopalians living on Shockoe Hill, in what was then the western edge of the city, petitioned Bishop Richard Channing Moore seeking permission to start a new church on Shockoe Hill. In 1835 a small lot at the corner of Fifth and Marshall streets was acquired and a small Sunday school building was erected on the property. In 1837 the Reverend Adam Empie, president of the College of William and Mary, was called to be rector. The first service was held in November, 1837 in the Sunday school building and the cornerstone was laid on April 2, 1838. Consecration services were held on June 23, 1839.

In 1854, following the rectorship of Dr. Empie and that of his successor, Dr. George B. Cummins, the vestry elected the Reverend Joshua Peterkin. Dr. Peterkin, who served for thirty-seven years, was active in establishing other churches in Richmond, among them Holy Trinity, St. Mark’s, and St. Philip’s. During the days of racial segregation he taught African Americans to read and during the Civil War he ministered to Confederate soldiers. Two windows in the present church are memorials to communicants General J. E. B. Stuart, whose funeral service was held at the church, and Captain Sally Tompkins, who was the only woman officer in the Confederate Army. The attractive brass pulpit used today was given as a memorial to the beloved Dr. Peterkin shortly after his death in 1892.

His successor, the Reverend John K. Mason, advocated moving the church to what was then the west end of Richmond, a move intended to follow the gradual western movement of many communicants. His dream was realized under the rectorship of the Reverend William Meade Clark. On May 7, 1912 the cornerstone of the present church was laid at Franklin and Birch streets.

In April 1915, the vestry called the Reverend G. Freeland Peter, who remained until 1928. In 1926 the St. Andrew’s Chimes were given to St. James’s by Mr. Henry Lee Valentine. In addition to calling worshipers to church on Sunday, they ring daily at9:00 in the morning, noon, 3:00 in the afternoon and at 6:00 in the evening – signaling neighborhood children that it is time to hustle home for either lunch or supper.

Dr. Churchill J. Gibson began his ministry at St. James’s in October 1929 and served as its rector until April of 1957. His joyful faith, happy nature, and acute sensitivity endeared him to his congregation and to the community. Under his leadership the church continued to grow. Additional space was added to the Sunday school building. It was designated the Churchill J. Gibson Building and was opened in 1956.

The Reverend Richard Royal Baker III was rector of St. James’s from 1957-1978. He arrived at the time of social unrest in this country and Mr. Baker very skillfully guided the congregation through this difficult period.

When the Vestry decided to initiate a drive to raise funds to pay for air conditioning the church, Mr. Baker suggested that one half of the funds raised (approximately $50,000) be given to the diocese to build St. Martin’s church in Richmond. Mr. Baker conceived the idea of the Stuart Circle Parish, established in 1970 with St. John’s United Church of Christ, First English Lutheran Church, Grace Covenant Presbyterian Church, and Cathedral of the Sacred Heart “to be an instrument for common work and mutual inspiration.”

As his health began to fail, Mr. Baker relied more and more on greater involvement of the laity in assisting in church services and in visiting newcomers and the sick. A tradition of lay involvement has remained a hallmark of St. James’s to this day. Mr. Baker’s health continued to deteriorate and he stepped down as rector in October 1978, ending a twenty-one year tenure at St. James’s.

The Reverend R. Martin Caldwell, Jr. served as rector from August 1979 until October 1981. The Reverend Frank F. Fagan became the rector of St. James’s in August 1982 and remained for ten years. He was pastor to his flock and a much beloved parson. During his rectorship the Children’s Center was established under the direction of Geraldine Johnson. It is an early childhood education program for children, especially those with disabilities or other challenges. The Center has been very successful in working with children with disabilities.

Frank Fagan retired in December 1992 and the Right Reverend Joseph Heistand served as interim rector while a search committee looked for Mr. Fagan’s successor. In March of 1994 the vestry elected the Reverend Robert B. Trache to be rector. He served St. James’s through 1999. In July of 1994 lightening struck the church and a great fire destroyed the roof and much of the interior of the sanctuary. Mr. Trache’s administrative talents were put to good use as the church entered a rebuilding process. Rabbi Jack Spiro, leader of our neighbor temple Beth Ahabah, kindly invited the congregation to use the temple for Sunday services while the restoration was in progress. As a result of a successful campaign to raise funds for the restoration of the church, there was also enough to build a much needed parking deck.

During Mr. Hollerith’s tenure, the campus was expanded in 2008 to a new education building that combined 1133 West Franklin Street, which was already owned by the church, and 1135 West Franklin St., plus additional new construction to the east.  Names the Michaux House in honor of Dr. Richard and Mrs. Julia Gray Michaux, who gave the monies necessary to purchase 1135 for the church, the expansion enabled a widening of ministries to the parish and the community with many classrooms, a commercial kitchen and first-class meeting space.

In 2010, the existing facilities of Gibson Hall were renovated, providing full-time classrooms and offices to the St. James’s Children’s Center, more rehearsal space for the Music Department and a number of conference rooms around a welcoming Atrium space. A 2013 fundraising campaign added a million dollars to the church’s Endowment Fund in connection with the celebration of the church’s 100th anniversary at its present site on the corner of West Franklin and Birch Streets.